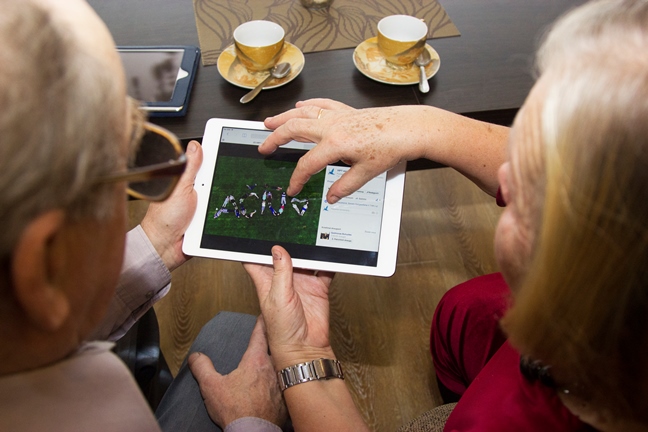 Results of Survey Are Now Available

9. May 2017 Berlin
People older than 65 are interested in possibilities of using tablet PCs. However, they still are skeptical to explore the digital devices (such as the tablet PC). Within the scope of the European project “Connect Seniors to the Digital World” the interests and wishes of elderly people regarding the use of tablet PCs were explored. Based on the results of the survey a pilot training for multipliers working with senior citizens will be developed and conducted in the beginning of 2018. The project aims to show how the opportunity of using a tablet can enrich the daily lives of elderly people.

The results of the international survey in the four countries Germany, Spain, Romania and Lithuania show that older people are interested in the possibilities a tablet PC can provide. However, the majority of respondents are not aware of the added value that using a tablet PC will have for them personally. 67% of seniors do not know what practical benefits the tablet PC usage has to offer and for 56% tablet PCs are completely unknown. And still, 76% of the interviewees can imagine to watch films and pictures via tablet PCs, 70% of the respondents want to learn how to communicate with their families and friends and how to search for information on the Internet. Security aspects often are barriers for using a tablet PC. Also the caregivers – multipliers who work with seniors – only feel partially secure in using a tablet. One third of the respondents say that sharing pictures, creating an email account or installing apps are activities in which they feel rarely or not at all safe.

“Here we find a huge need for both multipliers and senior citizens to catch up. Digital opportunities, for example communicating with the family or former friends or exchanging pictures via messengers, increase the participation of senior citizens in social life and thus their quality of life," Project Manager Katrin Schuberth of the Digital Opportunities Foundation explains. Moreover, the surveyed multipliers consider the facilitation/imparting of ICT skills and competences in small groups or in consultation meetings as particularly suitable for the target group over 65 years old.

383 people older than 65, 335 multipliers and 40 decision-makers of public education institutions (e.g. libraries) or institutions for senior citizens took part in the overall three surveys that were conducted in January and February 2017. The objective was to evaluate the learning needs the elderly have when using tablet PCs. Furthermore, the need for support which multipliers observe and have when promoting ICT-knowledge was analyzed.

The tablet can be used intuitively and provides access to a variety of digital offers such as information, communication opportunities, orientation help and diverse forms of entertainment that have an added value for the users. Throughout Europe, people over 65 are the population group that is underrepresented when it comes to using the Internet. The access via simple operating options of digital devices, namely the tablet PC, supports them in using the opportunities and offers of the Internet.

Four organizations that promote adult education from Lithuania, Romania, Spain and Germany are developing a training for multipliers working with senior citizens in the two-year project “Connect Seniors to the Digital World”. Especially multipliers that work with senior citizens often are the first contact persons for the target group. The project builds on the experiences of the German project “Tablet PCs for Seniors” that Stiftung Digitale Chancen is conducting in cooperation with Telefónica Germany. “Connect Seniors to the Digital World” is funded in the strategic partnership Erasmus+ program of the European Commission. The entire report “seniors’ and multipliers’ training needs” is available in English and contains national evaluations of the survey: